I grew up when Diff'rent Strokes was a popular television show. That's no big deal unless your last name is Willis. To this day I still hear those famous words popularized by Arnold: "Whatchu talkin bout Willis?" Usually they are uttered by someone looking at me as though I may have never heard it before. Yeah, right! Well this blog is what I (Willis) am talkin bout...my thoughts, observations & opinions. Enjoy... 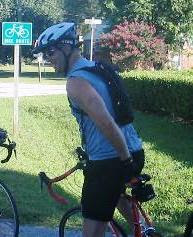 My wife & I did 50 miles on our bikes yesterday. It was my second time going that far. You have to wonder why I'm sure. It's training...We are signed up for a 150 miles over two days bike ride on the Eastern Shore of Virginia at the end of this month. It's called the "Bike MS: Virginia's Ocean to Bay Ride 2008." We are part of a team with family and friends from church. It's to raise money for therNational Multiple Sclerosis Society but it also corresponds with the anniversary of the death of a friend, Bruce Horner. Bruce was killed in Iraq and I wrote about him previously. Bruce is one of the many fallen soldiers who have made the ultimate sacrifice. Our team name, "Team Fallen Soldier" reflects our desire to honor all of them. Those who knew Bruce Horner, are confident that he would've been right there with us saddling up and doing the MS 150! He was that kind of guy. So, we ride to help raise money for MS, to remember Bruce, and to honor all the fallen soldiers. If you have any interest in supporting us financially you can click here. By the way, that's Bruce on his bike in the pic.
Posted by David H. Willis at 8:01 AM

Man I miss him!I remember mountain biking with him a few times. May God keep you all safe on your ride. I'm sure if it's possible Bruce is looking down and smiling at you all.

Melissa said...
This comment has been removed by the author.
7:20 PM

I posted this earlier...but for some reason, it got deleted...weird!

Hope you have a safe ride! That's an awesome undertaking for a very worthy cause!